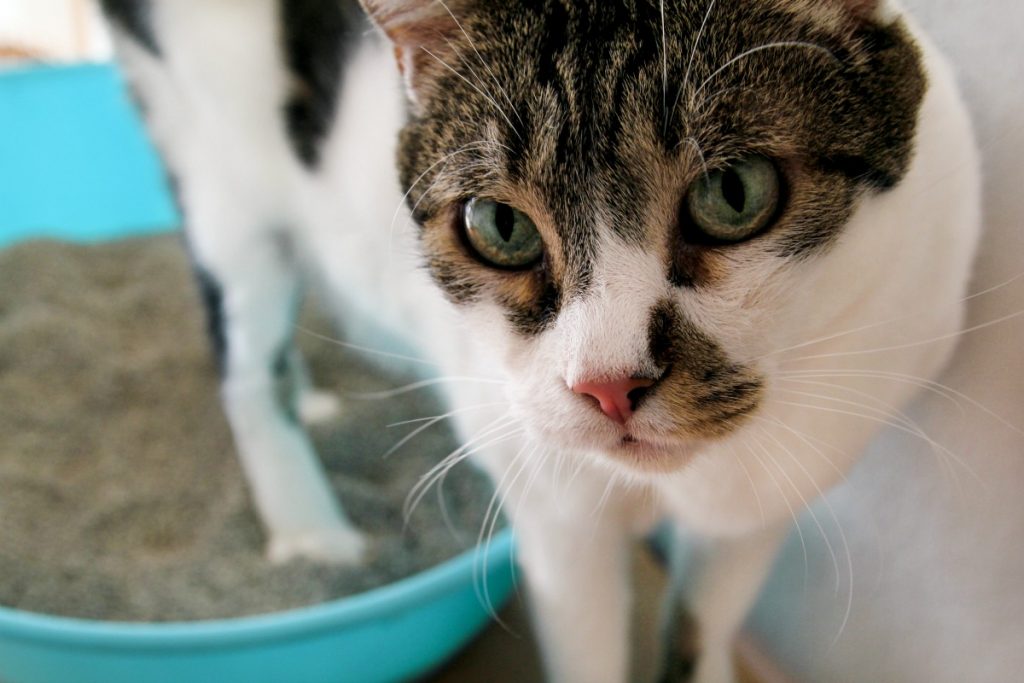 Inappropriate urination is the most common and least acceptable behavioural problem seen in cats.  There are a variety of reasons that a cat may stop using its litter boxes, including both medical conditions and environmental changes.

It is important to investigate a medical problem by having your cat examined by a veterinarian and possibly having some tests done.  Medical causes of inappropriate urination can include diabetes, kidney disease, liver disease, hyperthyroidism, urinary tract infections, urinary crystals or stones, constipation, senility, and orthopedic (affecting bones or joints) problems.  These problems must be treated appropriately to improve the health of the cat and make it more likely that the cat will begin to use its litter box again.

If medical problems have been ruled out or cured, and the problem persists, then environmental modification or medication may be required.  Sometimes the initiating cause of the problem can be identified. In a multiple cat home, there may be a territorial conflict between cats.  There may be a stray cat outdoors that is influencing an indoor cat to mark its territory. Sometimes a dominant cat will even attack a subordinate cat in the litter box. Cats will often refuse to use a dirty litter box.  Some cats prefer certain types of litter or other substrates to urinate on. They may not like the location of the litter box, may find it too small, or not like a covered box. Anything that causes stress, such as a move, different people, or new animals in the home can trigger the problem.  If a cause can be detected and fixed that should be done. If the cat is still intact, it should be neutered as hormonal influences can motivate urine marking.  Unfortunately, once a cat has started to spray it tends to become a learned behaviour and additional measures must be taken to resolve the problem.  Anti-anxiety medication (buspirone, diazepam etc.) can often be beneficial but should be used in conjunction with a retraining program for the best success. A retraining program entails some basic tips, making the litter box more appealing, and discouraging the use of alternate sites.

Stop all punishment when the cat makes a mistake. Scolding, hitting, or rubbing the cat’s nose in it after the fact is counterproductive.  This only serves to confuse and upset the cat making it more anxious and wary of you. If you do catch the cat in the act it is OK to spray it with a water bottle or shake a noise-maker to startle it, then take it to its litter box.

Keep the food and water dishes away from the litter box, ideally in a different room. Cats do not like to urinate or defecate near their food.

Confinement is often recommended until the cat is using its litter box consistently. Essentially, this means confining the cat to a restricted area with its litter box and only letting the cat out under supervision. It is important not to ignore the cat as being separated from family members can be stressful for the cat. A better approach is reverse confinement in which access is restricted to areas were inappropriate elimination is most harmful and areas that the cat has selected to eliminate. The longer the problem has been occurring, the longer it takes to solve so it is important to be patient and persistent.  Another alternative to confinement at home is boarding the cat for a week or two.  Often the cat will continue to use the litter box when it returns home. Set some time aside to interact with your pet, preferably for 15-20 minutes twice a day at a consistent time. This serves to strengthen the bond between owner and pet as well as reduce the cat’s stress.  Suggested activities include playing with a toy, or string (be sure never to leave the cat unsupervised with string), petting, or grooming the cat.

With recent changes to restrictions on businesses, we have made some important updates to our operating policies.